Remember that assurance from the Internal Revenue Service that its agents never call you about an overdue tax bill. 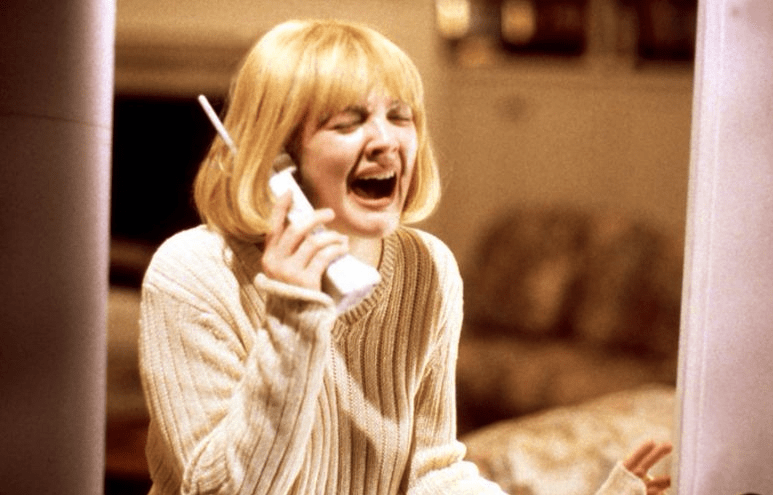 The IRS is about to turn over some delinquent tax accounts to private debt collectors. Again.

And those companies’ employees, as subcontracting agents of the IRS, will be calling folks about the money they owe the U.S. Treasury.

Bill collecting concerns, scams: If you think this opens the door — and windows and attic vents — wide for tax scammers, you are probably correct. And you are not alone.

I’m worried about increased scam phone calls where con artists will use private bill collecting as a hook to steal taxpayer money.

So is the IRS, which isn’t thrilled with this latest involvement of private collection agencies, or PCAs as they’re called in Washington, D.C. acronyms.

Collecting tax money is the most important job the IRS has and agency officials have long argued that it’s one best done by IRS employees.

That proved to be the case the two previous times the IRS used PCAs. In those instances, it cost Uncle Sam twice as much (or more) money to use debt collectors as the private firms recovered.

But Congress decided the IRS should give it another go, and included the PCA mandate in a 2015 transportation bill.

No, it is not just coincidence that Capitol Hill’s two biggest PCA tax collection cheerleaders are Sens. Chuck Grassley (R-Iowa) and Charles Schumer (D-New York). But political implications aside, we’re stuck with them again.

In this relaunch, about 380,000 accounts will be transferred to collection companies.

And IRS is getting ready to send letters to those taxpayers who will be hearing from one of these collection companies.

The new letter, new safeguard: The new letter, Notice CP40, will be sent to individuals when the IRS forwards accounts to one of the collection agencies. 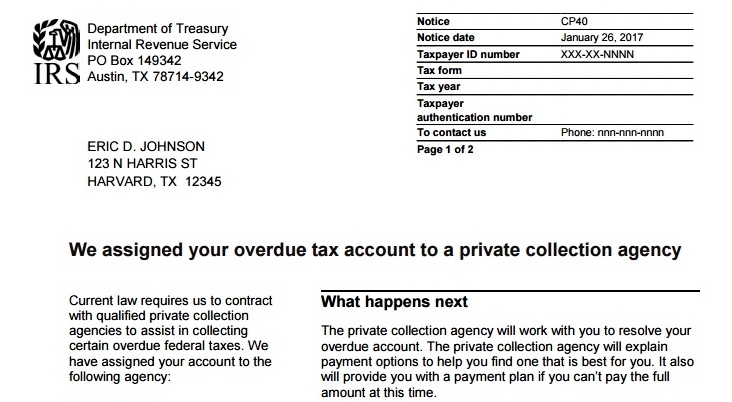 On it, the taxpayers will find in the upper right corner a new “taxpayer authentication number.” That account number will be used as a two-party verification method so that taxpayers who get collection calls will know the phone contacts are real and not scams.

The calling bill collector will ask the taxpayer for the authentication number’s first five digits. The PCA rep then will tell the taxpayer the final five digits of the number.

You should talk to the caller only after that individual taxpayer dual authentication process is completed.

But before that call is made, the IRS says the collection agencies also should send taxpayers letters alerting them that their overdue accounts are now in their hands.

Other taxpayer resources: The CP40 notice also contains info for affected taxpayers about their general taxpayer rights, the Taxpayer Advocate Service and where delinquent taxpayers can find help in resolving their tax bills, such as the IRS’ credentialed tax preparer directory and Low Income Taxpayer Clinics (LITCs) can help.

You also can check out the new IRS Publication 4518, What You Can Expect When the IRS Assigns Your Account to a Private Collection Agency. The IRS is stuffing a copy of this brochure in the CP40 envelope.

Stay on scam alert: Now about those potential tax scams that everyone expects to crop up as this latest PCA program gets underway.

They will occur. You can bet on it. Tax identity thieves know well what’s going on in the tax world and try to get into the scam act quickly before their potential victims become aware of their nefarious schemes.

The IRS hopes, however, that the preparatory moves for the upcoming PCA calls will assuage taxpayer concerns and help the process go smoothly.

First, if you don’t get letters from both the IRS and a private debt collector with details on this latest tax collection effort, be wary of any calls from bill collectors saying they are working on behalf of the IRS.

Only talk to a PCA representative after completing the two-party taxpayer authorization number process.

Check your caller ID. The agency’s letter should include a phone number that you can look for when the legitimate collector calls.

And of course, follow the general advice on how to avoid becoming a tax identity theft and/or tax scam victim that the IRS has issued many, many times.

Pay only Uncle Sam: That means you should never, ever send a requested payment to any third party, not even to the collection agency.

Never, ever wire money directly to any individual or company.

Never, ever make a tax payment via a gift card.

Send all payments on your overdue tax bill only and directly to the IRS, either electronically using one of the agency’s approved e-pay methods or by snail-mailing a check made out to U.S. Treasury.

Finally. Take every step you need to confirm that the call is not a scam.

The IRS has waited this long for your money. It shouldn’t have a problem giving you a bit more time to make sure the tax collection effort is legit.