The Tax Cuts and Jobs Act is the most sweeping update to the U.S. tax code in more than 30 years. The reforms will simplify taxpaying for many individual Americans, lower taxes on individuals and businesses, and update the business tax code so that American corporations and the people they employ can be globally competitive again. 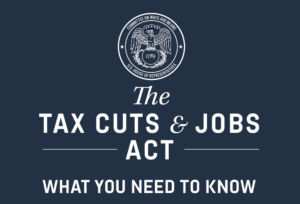 The Tax Cuts and Jobs Act bill was passed by both the House and the Senate and signed into law by President Trump. The Tax Cuts and Jobs Act has the potential to unleash higher wages, more jobs, and untold opportunity through a larger and more dynamic economy. The bill’s pro-growth components include a deep reduction in the corporate tax rate, a scaled-back state and local tax deduction, full expensing, and lower individual tax rates.  The bill also repeals Obamacare’s individual mandate, expands college savings accounts, and increases some non–growth-enhancing tax credits and deductions.

Are there any Earned Income Tax Credit or the Additional Child Tax Credit Delays?

Will I be getting $2000 dollars extra on my tax refund when I file this tax season because of the new Tax Reform Laws?

If I don’t have health insurance, will I still be penalized?

Tax Brackets. The number of tax brackets remains at seven; however, the tax rates and income covered have changed.

Personal Exemption. The deduction for personal exemptions is repealed through 2025.

Child Tax Credit.  The child tax credit, which helps parents offset the cost of raising children, will double from $1,000 per child to $2,000. The bill also makes up to $1,400 of the credit refundable. This means you can claim that portion of the credit even if your income is too low for you to owe tax. This is a credit, so it’s particularly valuable because it directly reduces your tax bill — not just your taxable income. Taxpayers don’t have to itemize to receive it. The credit will begin to phase out once a household’s adjusted gross income hits $200,000 for individuals or $400,000 for couples. An additional $500 credit is provided for each non-child dependent. Also, Social Security numbers for children are required before claiming the enhanced credit.

Estate Tax. The exemption (currently $5.5 million) immediately doubles to $11.2 million in 2018 and remains at this level for the next six years, after which time the estate tax is eliminated completely (the tax year 2026 and beyond).

Education-Related Tax Credits and Deductions. 529 Savings Plans are expanded to allow some funds (up to $10,000 for certain expenses) to be used for K-12 education. Rollovers to Achieving a Better Life Experience (ABLE) Sec. 529A accounts will be allowed as well. The student loan interest deduction remains.

Mortgage Interest Deduction. Remains but with a few changes such as allowing interest deduction for up to $750,000 (currently $1 million) in mortgage principal on new homes. Existing mortgages are grandfathered in. Homes entered into a contract before December 15, 2017, and closed on by April 1, 2018, are able to use the prior limit of $1 million.

State and Local Income Tax Deduction. Preserved. The deduction allowed for up to $10,000 a year in state and local income or property taxes.

Note:Taxpayers who prepay 2018 state income taxes, a common tax planning strategy, cannot take the prepaid 2018 amount as a deduction on their 2017 tax returns.

Medical Expense Deductions. The Medical expense deduction (currently 10% of AGI) is temporarily lowered to 7.5% of income for tax years 2017 and 2018.

Miscellaneous Deductions. Many are repealed through 2025 including those relating to tax preparation, alimony payments (after December 31, 2018), and moving expenses with the exception of the moving expense reimbursement for members of the Armed Forces on active duty who move because of a military order.

Individual Healthcare Mandate. The penalty is eliminated for tax years starting in 2018.

Corporate Tax Rate. Starting January 1, 2018, the corporate tax rate is reduced to a flat rate of 21% (down from 35%). The corporate AMT is repealed.

Territorial Taxation. Companies with offshore earnings, currently taxed at a 35% rate, would transition to a territorial tax system. Under the tax reform bill income derived from offshore earnings, if repatriated, would be subject to an effective tax rate of 15.5% for earnings held in liquid assets (i.e. cash) and 8% for illiquid (other) assets.

Business Interest. Small businesses (under $25 million) retain the ability to write off interest on loans subject to limitations.

Business Expensing. Businesses would be allowed to immediately write off the full cost of new equipment at 100% through the tax year 2022, after which it would be phased down over a four-year period.

Endowment Assets. A 1.4% excise tax is imposed on investment income derived from endowment funds at private colleges and universities. An exclusion is provided for an institution with less than 500 full-time equivalent students whose endowment (fair market value) is less than $500,000 per student.

If you have any questions feel free to ask them below. We have been following the new tax reform laws closely. And as soon as new information is released we will be posting it here!